‘The trend for slime shows no sign of slowing down with over 3 million instagram posts and countless videos on Youtube engrossing children up and down the country. Now, there’s a new way to way to customise slime and it’s the hottest fashion accessory on the high street.’ Glam Goo 2018.

Big A was very excited to review these and when she told her friends she had ‘glam goo’ they were very envious. 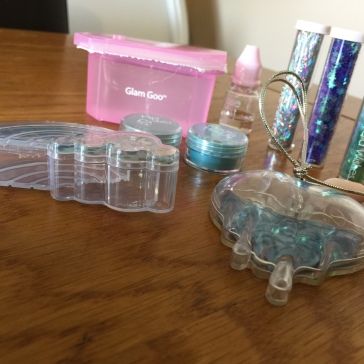 The bag is perfect to hold all the slime in separate compartments. We found out from the Fantasy pack that if you leave the pots open ever so slightly they dry out. (Opps). The pots of sparkles are big enough that you can create some really sparkly goo’s. The big set comes with a huge tub of goo which you can make lots of different colours and combinations.

Here are a couple of videos by Big A to show us how the sets work:

It was easy to make and considering the goo is super sticky initially it doesn’t make a mess and get everywhere. We noted the instructions suggested covering the area you are mixing in but we didn’t and there wasn’t any residue left. The sparkles do sometimes fall out of the goo when playing with it so I would suggest if you are anti-glitter ask your children to play with it over a tray or up the kitchen table so you can clean away easily after.

The Glam Goo Deluxe pack has everything you need to make slime fashion your own. Customise and store your favourite slime creations in your purse or ring. Includes a container of Glam Goo (clear slime), a glitter purse and double ring, three slime decorations – Cloud Crunch, Daydreams and Unicorn Tears, two colours – Electric Blue and Pinky Promise, one scent – Violet Vibes (lilac), and one mixing spoon

Glam Goo is available from Smyths, Toys R Us, The Entertainer, Argos, Asda, Tesco, and all good independent toy retailers

What we thought : We would love to see some different colours added to the range including some darker colours and possibly a set geared towards boys as this was predominantly aimed at girls. All the glitters have different names and Big A says some of the glitters are almost identical. Adding little balls/other textured items would be cool. Also add on packs which could be bought with pocket money would be cool such as scents, glitter, sprinkles.  Big A and K have requested some more glam goo for their birthdays.

Disclaimer we received these glam goo packs for free in exchange for an honest blog review post.